Tag Archives: Edge of the Empire

Download “Level Up Mail Bag”
The NPC Cast enters 2nd Edition, and fields questions from the NPC Universe! We’re also on YouTube now, over at One Thousand XP. Oh, and you can all finally level up! (53min)

To get the Star Wars: Edge of the Empire PDFs that Del was referring to, head here: https://www.patreon.com/posts/level-up-mail-7648658

My Star Wars game, which I’ve written about many times, finally wrapped up, with my heroes having freed a dangerous Moff as the general they needed to lead the war effort against an unfrozen Sith-out-of-time who was conquering the galaxy and proclaiming himself “The Returned God”

Since my players are the best players, I created a little video for them to check out of their adventures afterwards. I asked each of them for narration; some got back to me, and I used their text, others I filled in the blanks based on their characters.

I hope you enjoy it and it gives you a few ideas for how to wrap-up your games at home.

Edge of the Empire Trading Sub-Game

My players in my Edge of the Empire game are leaning into their role as traders and traffickers. To facilitate their dreams of hauling space cargo, I created a very, very simple trading sub-game to let them make money outside of literal quest rewards. The set-up is pretty simple: Each time they touch down on a new, populated world, I roll a d8 six times, and record the result on a form I created and then laminated (so I can re-use it):

Players can then buy any amount of any good they want, at a standard (0) rate of 100 credits per unit. Goods that roll a (-) cost just 50 credits per unit; Goods that roll (+)’s add 50 credits per plus (so if Contraband rolled ++, it would buy and sell at 200 credits per unit). Each unit also takes up a set amount of Storage on their ship, so contraband (such as glitterstim or spice) takes up almost none, while heavy ores and fabrication materials take up a *ton* of space. To offset this disparity, I have made it easier to make money on essential items like food and ore, since those are always relatively in demand. The chart for what items will be in demand at each starport is available here: 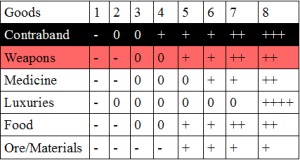 Note that Contraband and Weapons are black and red, respectively. These items are either illegal or restricted, and carrying and selling them could come with additional risks, requiring a Streetwise or Negotiation roll to find the right buyer.

Luxuries (like the dwindling supply of Alderaanian Pinot Noir that survived by being in off-world cellars) are rarely found cheap, and most of the time command a fair price – but once in a while, you find a whale that is desperate for that Rancor-foot desk wastebin you’ve been hauling around.

You could even use these randomized, simplified rolls to generate story – did you roll an 8 on Medicine? Perhaps there’s an outbreak on the planet. If the players think to run to Thyferra to pick up Bacta cheap, have them keep in mind that everyone will have this info, so they’ll need to be cunning astrogators to get to Thyferra and back in time to cash in on their plan.

This isn’t a super-deep system, by design, but it’s a little something to make your home game a little more interesting and hopefully give your players something to do with all their ship’s cargo space.

In this episode, the guys do a system mastery episode of Star Wars: Edge of the Empire! (54min)

Things you may find interesting:

Star Wars: Edge of the Empire

[This post is a companion to episode 113 of NPC Cast, titled “Edge of the Empire”]

In acting (particularly stage acting) there’s something called ‘business.’ Business is a little thing or action an actor has to fill space when they aren’t currently speaking or doing something. Rolling a half-dollar over their knuckles, smoking a cigarette or cleaning their glasses are great examples. I love having that in my games as well, giving the players something to interact with even when they aren’t currently rolling dice or interacting with an NPC. The easiest way to get that is props.

Very early on in my Edge of the Empire campaign I decided I wanted money to matter, down to about the 25 credit mark. But rather than have pencil erasers wear their way through the corner of a character sheet, I decided to do something a little different – actually make galactic credits! I started by photoshopping up the credit symbols, using the SF Distant Galaxys font. Then I reversed the image in GIMP and had it printed on plastic transparency sheets.

I then went to a craft store and got some spray glue and some reflective scrapbooking cardstock. A quick trip outside (safety first when dealing with aerosols, kids!) and glued the transparencies to the cardstock, with the glue and ink both on the “inside,” so the cover is clear. Scissors get everything sliced into tiny sticks and now when they dock, they actually have to hand over 50-100 credits (or use Negotiate to haggle that down to 25). Total cost to make these was about $8 (plus the cost of spray glue, but that stuff is useful so you should have it anyway)

I also used a similar process along with manipulating an image of a Star Wars datapad to create the infochant pipeline. Before each session, I can use a wet-erase marker to fill in juicy information (or worthless information) as a world-building exercise, and give them a heads-up on what’s happening in the Star Wars galaxy at large. If I want there to be a story or want to not immediately give up valuable info, I can attach a roll to getting it. These sorts of throwaway bits can go a long way to making players feel like they’re actually smugglers hustling to fill up their hold with supplies, and going to the location that they feel they have the best chance of unloading them at a profit.

Speaking of supplies, I grabbed a fillable-form PDF of a Ship sheet from the Fantasy Flight Games community and completed the parts that were unlikely to change, then had it laminated. The crew has their own wet-erase marker to track things like crits, damage, cargo and upgrades. For 60¢ I have something that will stand up to the abuse of the DM’s bag, and is easily findable in the pile of papers every DM has with them all the time to hand out to the players.

Laminated for your protection

I run an Edge of the Empire game for our group. It’s a fantastic system.

We have Vic Vakarian, the human captain from Thyferra, Icantnam Donar, a human slicer spacer, Ko Digga, a Rodian Bounty Hunter from Rodia, and Bok Lesta, a glit-biting Twi’lek pilot from Ryloth. Impossibly, this image actually sums up our group almost perfectly:

Most of the time, our games are action-packed and fit the Star Wars adventure mold – lots of blasters, running from things, derring-do and just general adventure. It goes something like this:

Recently, though, I had a session I was personally really displeased with how it went down. The crew was investigating what may or may not be a hidden Rebel base in the Vad system. They managed to find a Golan Space Platform that was in a stationary orbit between the gas giant Vad V and the sun, blocking it from outside detection.

They managed to cajole their way onto the platform, docked and began exploring/accomplishing their goals on the site, conducting an investigation into who might be selling glitterstim from under the Rebel’s noses.

This played directly into the strengths of Vic Vakarian, the team’s fast-talking and charismatic pilot, as well as Bok Lesta, whose obligation is to the Black Sun and has a background in the underworld. Even Icantnam got in on the action, slicing additional privileges onto their guests badges.

But then there was Ko Digga, the Bounty Hunter:

While previous sessions had a lot to do with his Obligation (Duty to his Bounty Hunting code, which is nearly the official religion on Rodia, a planet with a strong hunting culture), this session he didn’t have very much to offer. Because it was an investigation and infiltration adventure, he had nothing to shoot at (yet) and he didn’t have the particular set of non-combat skills that would be applicable in this situation.

During the game, I was caught up in the storytelling and getting everyone involved, answering their questions and digging deeper into the mysteries of the Vad V Space Station, and I didn’t realize until after the session that I had basically abandoned Ko.

While you may be having fun, one of the responsibilities of the GM is to make sure that fun is spread evenly around. Nobody wants to play in the “Superman and his friends the dumb idiot background characters” game; they want to play as the Justice League, each one contributing. Take a moment every now and then to think about the last time you made an effort to involve each player. Make sure that the spotlight doesn’t fall on the player whose character is the most important right now, but make time for each character to shine. If you do, you’ll find that your players are more invested, and there’ll be less people with their eyes glazing over, not invested in the game and checking their phone.

In this episode the NPCs chat about benefits, merits, flaws, and hindrances…and feats…and skills…and powers too. Oh, and aspects…and obligations. (65min)

Some things we discuss on this episode:

Magic the Gathering: Theros Artwork: What it says on the tin.